We're Getting Mutants in the MCU - The Loop

A Royal Pain is a Main Quest.

citizens can be seen. To continue, walk towards the queen (Standing in midst of the knights). The player will then be stopped. The queen announces, that they are here to pay there respect to the fallen rebels, who fought on the battlefield east of Onde City centuries ago and to visit the museum. The Queen and knights proceed to leave after her speech.

continue, you have to leave the first floor (through the western stairs).Before being able to go down stairs, the player will bump into the detective, who questions the present crowd. After this he asks the player to help him catch the thief.

Pokécenter, the girl in front of the front desk tells you she saw a scraggy in a costume running to the artist painting waves.

player receives a charcoal and the scraggy runs of again.

You have to answers Ciara (the wave Artist) question's 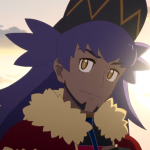